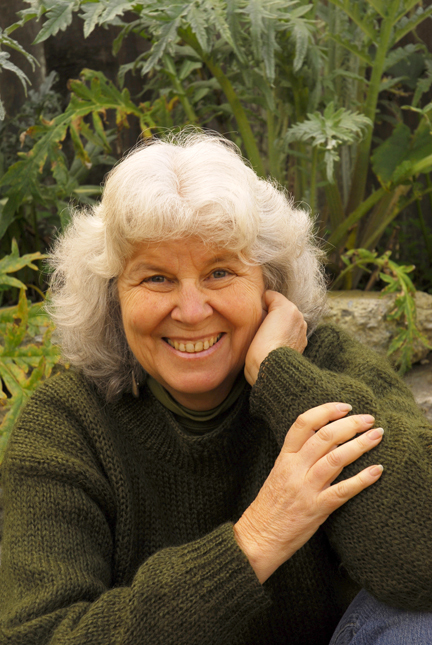 Pam grew up in Indiana and moved to San Francisco after she finished college with a BA in botany. She enjoyed California culture as well as the mild winters that allow a year-round garden. While studying the climate of the Bay Area and the plants that can be grown here, she gardened first in borrowed back yards and in containers on porches and windowsills, but soon found a gardening home in a community garden.

In 1980-83 she participated in the founding of the San Francisco League of Urban Gardeners (SLUG), an organization that supported both community and home gardeners citywide. She served on its board until 1999. Pam also taught horticulture at City College of San Francisco for 30 years.

Pam started her writing career at Turnover: A Magazine of Food Issues, a publication tied to the Bay Area Peoples Food System in the mid 1970s. For Turnover, she wrote on topics in nutrition, food preparation, food history, and food politics.

Her first foray into book publishing was as a photo editor and photographer at Ortho Books, and the first book she wrote was Controlling Vegetable Pests, a part of Ortho's Environmentally Friendly Gardening series. She also photo edited that book. The first edition of Golden Gate Gardening was published in 1993. Pam then wrote, co-authored, photo edited, or had photos in books that include Ortho Books, Sunset Books, Rodale Press, Readers Digest Press, and Storey Books.

Golden Gate Gardening is now in its third edition, which is much improved and expanded from the first and second. Published in 2010, spent 2 of its first 5 weeks in the top ten best sellers for Northern California. It now includes, in addition to two coastal planting calendars, two more planting calendars for varieties of inland microclimates. It is useful for those gardening from Humboldt County south to San Luis Obispo as well as for those in mild-winter inland climates. See Works page for more details.

Her book Wildly Successful Plants: Northern California, Sasquatch Books, 2004, uses 50 heirloom garden plants of California as an introduction to the joys of ornamental gardening in the region. It's illustrated with photos by her husband, landscape and garden photographer David Goldberg.

Pam has written garden columns for the San Francisco Chronicle (and sfgate.com) since 2006. An archive of some of these columns is available online. (See link, at right). Her column currently appears one Sunday a month in the Food And Wine section and is on some topic having to do with food gardening.

Pam is still concerned with food issues. The final chapter of Golden Gate Gardening, "A Garden-Based Cuisine" (excerpted on this web site) summarizes what she has learned about the garden/kitchen nexus and what eating from even a small garden can do for your diet and your understanding of our relationship to the land that feeds us.

She remains interested in addressing the questions raised in Turnover magazine many years ago that seem as pertinent now as they did then, or maybe more so--for example, the need to label bioengineered foods, the influence of corporations and agribusiness on nutritional guidelines, and what schools can do to encourage children to develop healthful eating habits. Pam's "Personal History of the Peoples Food System" appeared in spring 2011 in the book Ten Years that Shook the City: San Francisco 1968-1978.

Pam and David live in a house on a hill in San Francisco, where they watch the fog and sunshine chase each other across the sky and watch their apple tree go through its seasonal changes to produce a sweet burden every October.

"A Personal History of the People's Food System"